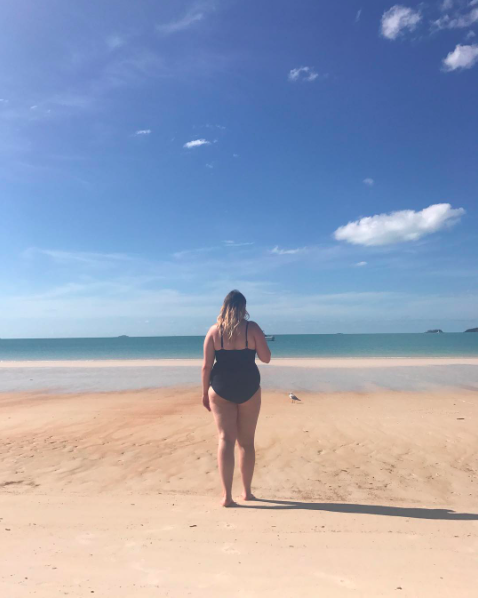 I never get deep on this blog… I rarely post and when I do it’s to showcase a new outfit I like or tell you about somewhere I’ve been to lately. I shared the above photo on Instagram from my recent holiday to Australia which I never thought I would. I think I’ve finally learnt to be content with who I am and I think that is more important than being accepted by anyone else.

I’ve spent the last however many years scanning every room I enter to see if I was the biggest person there, feeling so relieved when I saw someone who was even the smallest bit bigger than me… like who even cares? I went to Mexico in 2014 and felt so insecure I barely got in the pool, until I saw two girls who were considerably bigger than me loving life and enjoying themselves. At the time I thought JACKPOT I can feel confident and get my ass into the pool, but in reality I should have been looking at those girls and wanting what they have, to be happy in themselves and not give a crap what other people think.

I’m not saying I’ve hated myself so much I haven’t lived my life, gone out, experienced things I wanted to. But it’s definitely stopped me doing smaller things like getting my legs out in the summer and instead sizzling to death in jeans. Or even not taking my beach cover-up off when on holiday with the fear that when I do people will try and throw Shamu back into the ocean.

It doesn’t matter what your insecurity is or what it is that is preventing you loving who you are, but life is more than not enjoying your time on the most incredible beaches because you don’t want someone to think ‘God, she’s fat’. It was in Australia where I overcame this, when I wasn’t even thinking about it. We were in Cairns on a day tour, having been taken to the most beautiful waterfall. Without thinking I was down to my swimming costume (which FYI was from Marks and Spencer and made me feel great) and swimming amongst the fish. Something in Mexico three years previous I wouldn’t have even considered.

You deserve to love yourself, you deserve to do whatever the hell you want without caring what other people think. You deserve to live your life the way you want, and if that means appearing unhealthy to someone because you love carbs, hate moving and like splashing around in the sea it’s their problem not yours.

I am overwhelmed by the comments I received on my Instagram post, mainly because I shared it for me. I shared it more to show to myself that I do love myself. I love that I’m loud and outspoken, I’m accepting that I’m never going to be a size 0 and I don’t care that some people won’t like it.

L A D I E S (and gents), accept yourself, love yourself and don’t give a crap what anyone else thinks. Whether you wack it online as a statement to yourself or others as a milestone or you simply tell yourself you are great, do it and don’t look back.